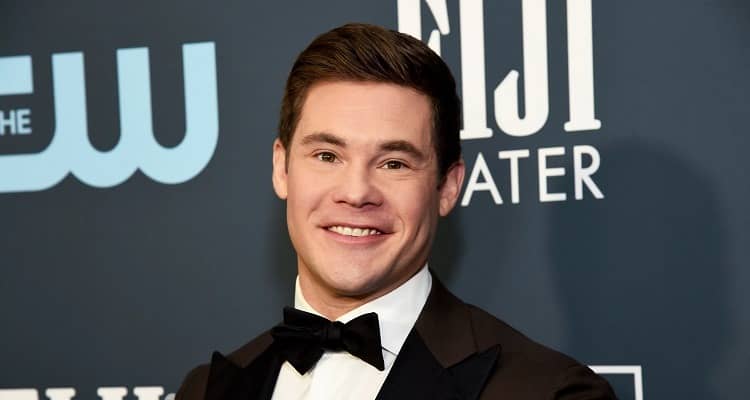 Who is Adam DeVine?

Adam DeVine is a well-known American comedian, actor, singer, screenwriter, and producer. He is a co-creator and one of the stars of the Comedy Central comedy television shows Workaholics[1] and Adam Devine’s House Party.

What is Adam DeVine famous for?

How old is Adam DeVine?- Adam Patrick DeVine was born on November 07, in the year 1983, in Waterloo, Iowa, the United States. His current age is 39, and his zodiac sign is Scorpio.

His father‘s name is Dennis DeVine, and his mother‘s name is Penny DeVine. He has one sibling, Brittani DeVine. DeVine’s nationality is American, and his ethnicity is mixed (Dutch-Irish-English-German).

Talking about DeVine’s education history, he graduated from Millard South High School in Omaha, Nebraska in 2002. He subsequently enrolled at Orange Coast College in California.

All about Adam DeVine’s Career

In 2006, he established the sketch comedy ensemble Mail Order Comedy with his pals Blake Anderson, Anders Holm, and Kyle Newacheck. The band performed in a variety of venues, but they gained more fame on YouTube and MySpace. The group also produced a music video titled ‘Wizards Never Die’ in April 2008.

On April 1, 2009, the Wizards published a music album titled ‘Purple Magic,’ which comprised 14 tracks. Simultaneously, Adam appeared in ‘Mama’s Boy’ in 2007, ‘National Lampoon’s 301: The Legend of Awesomest Maximus’ in 2009, and ‘Workaholics’ on the American cable and satellite television channel Comedy Central in 2011.

Blake, Anders, and Kyle also appeared in ‘Workaholics,’ and the whole cast was recognized as series creators and executive producers. In the same year, he appeared in an episode of ‘Traffic Light’ on Fox. In 2012, he starred in the musical comedy film ‘Pitch Perfect’ as Bumper Allen.

He played the character again in the 2015 sequel ‘Pitch Perfect 2’. Additionally, DeVine played William Winger, Jr. in ‘Community’ in 2013. He also appears in an episode of ‘Arrested Development’. Adam provided the voice of Pizza Steve in the animated sitcom ‘Uncle Grandpa,’ which debuted on Cartoon Network in September 2013.

In the same year, he wrote and starred in ‘Adam DeVine’s House Party,’ a Comedy Central comedy. He portrayed Andy in the ABC network’s sitcom ‘Modern Family’ in seasons 5, 6, and 7. He had an appearance in the comedy film ‘Mike and Dave Need Wedding Dates’ in 2016.

Adam landed two main parts in the same year. He played Noah Ashby in the romantic comedy ‘When We First Met,’ which he also co-wrote. DeVine was then cast in the Walt Disney picture ‘Magic Camp’ as magician Andy Tuckerman. The film is scheduled to be released in 2019. He will also appear in the romantic comedy ‘Isn’t It Romantic’ in the near future.

What is Adam DeVine’s net worth?- DeVine’s has a net worth of approximately $8 million. As an actor, he has an average salary of $45,662.

Is Adam DeVine married?- In 2015, Adam DeVine began dating Pretty Little Liars actress Chloe Bridges. They had become close while filming the horror film The Final Girls. After going to Disneyland and Sam Smith’s concert with a few pals in January 2015, speculations about their romance began to circulate. The pair proposed in October 2019 and plans to marry in October 2021.

Previously, he began dating actress Kelley Jackle in 2012 after becoming close during the filming of Pitch Perfect (2012). They provided a clue of their connection when they walked the red carpet together and put on an amorous show at the film’s premiere. She subsequently acknowledged their connection in an interview when asked who she enjoyed kissing in the film. They decided to split up in 2014 while filming the sequel to Pitch Perfect.

How tall is Adam DeVine?- DeVine has a height of 5 feet 8 inches and her weight is 77Kg. Hence, Adam has dark brown hair and hazel eyes.