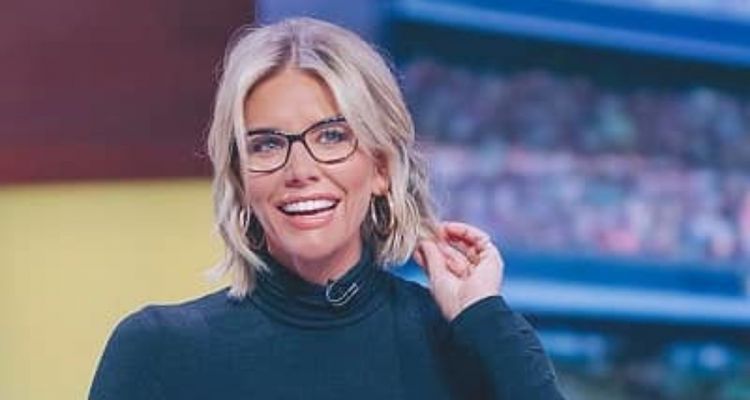 Charissa Jean Thompson is a sportscaster/host who is best known for her work with Fox Sports.

She was born on May 4, 1982, in Seattle, Washington State, United States. She had previously worked for ESPN, Versus, and the Big Ten Network, among other sports networks.

Charissa grew raised in Seattle and knew she wanted to be a broadcaster since she was a child.

She later attended Inglemoor High School and matriculated at Washington State University, but moved to California to help her gain California residency while attending community college, transferring to the University of California, Santa Barbara, and eventually graduating in 2004 with a degree in Law and Society.

All about Charissa Thompson’s Career

She began her sports broadcasting career with the network FSN, where she primarily covered baseball events and appeared on the shows “The 2007 MLB All-Star Game Red Carpet Parade” and “The Baseball Report.”

She went on to work for Fox, primarily as an NFL sideline reporter, as well as for the Big Ten Network, where she covered college basketball and football events. Charissa was a regular on shows like “The BCS Show,” “BCS Breakdown,” and “Friday Night Tailgate,” as well as co-hosting “The Best Damn Sports Show Period” before it was canceled in 2009.

Thompson also hosted the Atlantic City lottery show for numerous years while working on sports broadcasts, and performed in trapeze competition for a few years after that. She went on to host the show “Toughest Cowboy” before joining GSN as a co-host of “Big Saturday Night.”

Before covering sideline reporting for multiple National Hockey League games, she worked as a sideline reporter on the show “Shaq Vs.” She co-hosted the Speed Network’s “Fast Track to Fame” with NASCAR driver Michael Waltrip in 2010 and covered the Vancouver Winter Olympic Games for Yahoo Sports.

Charissa returned to Yahoo in 2010 to cover the FIFA World Cup in South Africa, as well as the college American Football BCS National Championship game the following year. She was entrusted with Super Bowl, NBA All-Star Game, and NHL All-Star Game coverage from Versus in 2011, but was eventually dropped from the network’s NHL reporting team following the NBC-Comcast merger.

She co-hosted the reality television show “Splash” in 2013, in which competitors dive from Olympic-size platforms and are scored by Olympic divers.

Charissa worked for ESPN on the show “Numbers Never Lie,” and she was also a fill-in anchor for “SportsNation,” subsequently becoming one of the main hosts, before returning to Fox. She joined the television show “Extra” in 2014, where she worked alongside Mario Lopez and Tracy Edmonds for three years before departing to focus on her work with Fox Sports.

Charissa started presenting the Netflix reality show “Ultimate Beastmaster” in 2016, which has celebrities from all around the world  ompeting in an obstacle course. She also joined Top Rank’s sportscasting crew to cover the “Manny Pacquiao vs. Jessie Vargas” pay-per-view boxing match.

Charissa was featured in an edition of “Access DirecTV” and worked with the publication on a feature story for a short time. On one occasion, she was the host of the “Barstool Spelling Bee.”

Charissa Thompson’s net worth is unknown. According to sources, he has a net worth of over $2 million as of mid-2018, which he has amassed through a successful career in sports broadcasting.

She was the co-host of ESPN’s “SportsNation” until she left the network, and her net worth is projected to rise as she continues her career.

Thompson was in a relationship with Jay Williams, a former college and NBA basketball player who is now a college basketball analyst, from 2011 to 2013. They dated for more than a year before splitting up. There have been no other known or rumored relationships.

She has stated in an interview that she is a Christian and that she currently resides in Malibu, California, where she owns a beach mansion worth about $3 million that she has recently listed for sale. A fire pit, suspended televisions, ambient lighting, and a Sonos sound system are among the highlights of her home.

All of the furniture is included in the home’s price.

She mainly posts personal photos, and pictures of her behind the scenes while at work. She also keeps fans updated with the latest events in the sports world, and posts some of her daily thoughts.