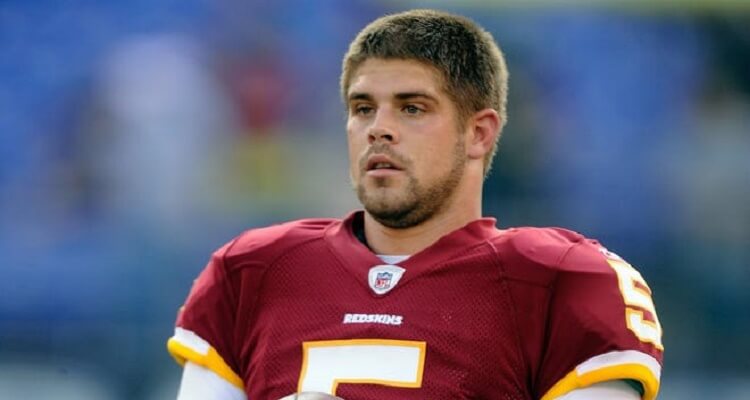 Colt Brennan is a former American professional football quarterback who played for the Washington Redskins. Moreover, he played college football for the University of Hawaii Warriors.

Colt Brennan was born as Colton James “Colt” Brennan in Laguna Beach, California. He was born on August 16, 1983, to parents Terry Brennan(father) and Betsy Brennan(mother). As of February 2020, his age is 36. His nationality is American and ethnicity is Caucasian.

He was interested in playing football and basketball from a young age.

Talking about his education, he attended Mater Dei High School in California. Following that, he joined Worcester Academy in Massachusetts for a postgraduate year. Moreover, he also enrolled at the University of Colorado.

Colt began his football career from his high school days. He played for the University of Colorado. However, due to an incident that convicted him, he was forced to leave Colorado. He then transferred to Saddleback College and led them to a conference championship. In 2005, he joined the University of Hawaii Warriors. He earned fame playing for the Hawaii team and quickly became the starting quarterback and established himself as one of the most important players of the team.

He played for the Hawaii Warriors from 2005-2007. His achievements with the team include:

In 2008, he got drafted by Washington Redskins. He signed a 4-year contract with the Redskins. He led all 2008 NFL rookies in passing yards, touchdown passes, and quarterback rating through the preseason. Colt looked very promising going into the season. However, an unfortunate hip injury and torn hamstring kept him out of the 2009 season. The Redskins traded him to the Baltimore Ravens in 2010.

Following that, he joined and left two teams, Oakland Raiders, and Hartford Colonials in 2011. Also, he signed with Saskatchewan Roughriders to play in the CFL. However, none of those moves worked out for him.

In 2013, he signed with the Los Angeles Kiss and played for a season in Arena Football League. In 2014, he was by from Los Angeles Kiss because of his brain injury in a car accident. He then retired from professional football.

His estimated net worth is in the region of $100k-$1 million. In his NFL days, when he was playing for the Washington Redskins, he had an annual salary of $391,800.

He is not active on social media sites.