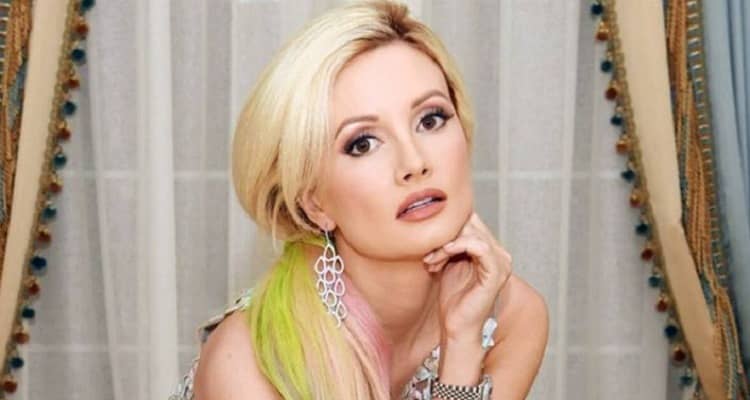 Who is Holly Madison?

Holly Madison is a well-known American model, television personality, actress, model, dancer, and voice artist who has appeared in a variety of shows and movies such as Holly’s World, The Girls Next Door, Doggy Fizzle Televizzle, The Big Idea with Donny Deutsch, CSI: Crime Scene Investigation, The Sharon Osbourne Show, and Keeping Up with the Kardashians.

What is Holly Madison famous for?

How old is Holly Madison?- Holly Sue Cullen was born on December 23, in the year 1979, in Astoria, Oregon, the United States. Currently, her age is 42 years old and Capricorn is her zodiac sign.

All about Holly Madison’s Career

She rose to prominence after appearing in the reality television series ‘The Girls Next Door,’ which first broadcast on the ‘E! network’ in August 2005. The show was created by Kevin Burns and Hugh Heffner and centered on Hefner’s girlfriends who resided with him at the Playboy Mansion.

In addition, Madison starred on her own reality show, ‘Holly’s World.’ Her life at Planet Hollywood in Las Vegas was the focus of the episode. The program was a hit, with 1.879 million people watching the first season premiere. The show ran for two seasons from 2009 to 2011.

In 2010, she also starred in an episode of the renowned crime drama series CSI: Crime Scene Investigation. She was last seen on television in an episode of the program ‘Redwood Kings.’ She also published two memoirs. The first, titled ‘Down the Rabbit Hole: Curious Adventures and Cautionary Tales of a Former Playboy Bunny,’ came out in 2015.

In 2015, she starred in the third installment of the Sharknado franchise, ‘Sharknado 3: Oh Hell No!’ Lieutenant Harrison was a character she played in a supporting role. ‘The Vegas Dairies: Romance, Rolling the Dice, and the Road to Reinvention,’ her latest memoir, was published in 2016.

Is Holly Madison Divorced?– Holly Madison is single. Hugh Hefner previously began dating Holly in 2001. Hugh had a number of girlfriends. Her video was uploaded on TMZ.com in 2008, announcing the end of their relationship. However, she and the other girls returned for the sixth season of The Girls Next Door.

Madison had a relationship with magician Criss Angel from November 2008 to February 2009. She initially met him while Criss was filming his show Phenomenon in Hollywood. In May 2009, she was still having an affair with English comedian and actor Russell Brand. From late 2009 to early 2010, she dated Benji Madden for over two months. Similarly, in 2010, she had a run-in with American MMA fighter Josh Koscheck. Then, from late 2010 to early 2011, she dated Jack Barakat.

She was also in a relationship with Jesse Waits, but they split up. Pasquale Rotella, an American businessman, began dating Holly Madison in late 2011. Rainbow Aurora Rotella Rotella, the couple’s first child, was born on March 5, 2013. On June 24, 2013, she announced her engagement to Pasquale via her blog. At EDC Las Vegas, he proposed to her from the top of the Ferris wheel.

The pair married at Disneyland on September 10, 2013. In August 2016, the couple had their second child, son Forest Leonardo Antonio. They did, however, divorce after their peaceful separation in 2018. Their divorce is scheduled to be completed in February 2019. Moreover, Holly began dating actor and TV personality Zak Bagans in 2019. The couple’s romance lasted over two years before they called it quits in early 2021.

How tall is Holly Madison?- Madison has a height of 5 feet 7 inches and her weight is 56Kg. Her body measurement is 36-26-36 inches, and her bra size is 32D. Hence, Holly has blonde hair and dark brown eyes.

As of Nov 2022, Danny McBride’s net worth estimated to be roughly $16 million.