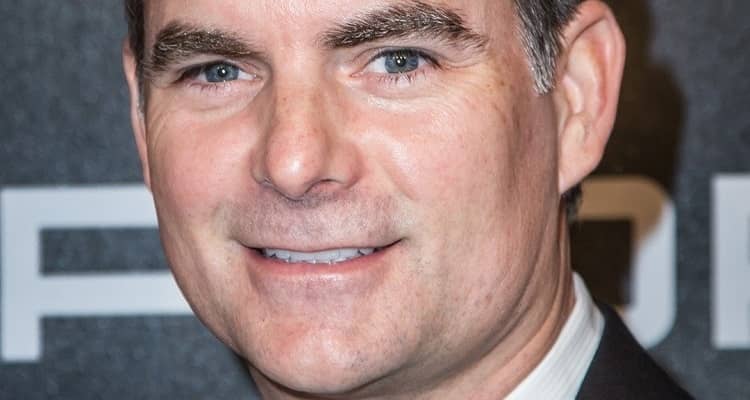 Jeff Gordon is a famous American stock car driver and was only five years old when he first performed laps on a rudimentary racetrack.

The winner of four NASCAR Cup Series championships in a seven-year span, he also helped transform auto racing into a mainstream American sport.

What is Jeff Gordon famous for?

Jeff Gordon was born Jeffery Michael Gordon on August 4, 1971, in Vallejo, California, the United States. Currently, his age is 49 years old. His zodiac sign is Leo.

His father is William Grinnell Gordon and his mother, Carol Ann Bickford. He has one sibling, Kim. Unfortunately, his parents divorced shortly after he was born, and Carol began dating a co-worker named John Bickford, who stoked Gordon’s interest in auto racing before becoming his stepfather.

Gordon began racing BMX bikes at age four, and the following year he slipped behind the wheel of a quarter midget for his first competitive driving experience.

Talking about his education history, he attended Tri-West Hendricks High School in Lizton, Indiana, and also graduated in 1989.

All about Jeff’s Career

Talking about his career, he has an interest in stock cars, Gordon earned a chance to race for owner Hugh Connerty in NASCAR’s Busch Grand National Series in 1990. He also joined Bill Davis’s team the following year, his first on the circuit full-time, and was named Rookie of the Year.

Additionally, Gordon soon caught the eye of owner Rick Hendrick, who marveled at the young driver’s control of his vehicle. In addition, Gordon signed with Hendrick in May 1992, and he made his Winston Cup Series debut that November in what turned out to be auto legend Richard Petty’s final NASCAR race.

Similarly, the Winston Cup Rookie of the Year in 1993, Gordon broke through with victories in the Coca-Cola 600 at Charlotte Motor Speedway and the Brickyard 400 at Indianapolis Motor Speedway in the year 1994. With crew chief Ray Evernham and his “Rainbow Warriors” helping to keep the No. 24 DuPont Chevrolet in top form, Gordon claimed his first series championship in 1995.

Then, Gordon helped transform auto racing from a regional spectacle into a mainstream sport. Whereas his corporate image rubbed some of racing’s old guard the wrong way, but even the critics had to acknowledge his immense skills.

Eventually, Gordon became the youngest driver to triumph at the Daytona 500 in 1997 and tied a modern record with 13 victories in 1998, finishing both years as the series champion. He also notched a fourth championship in 2001 with new crew chief Robbie Loomis in tow, culminating an amazing stretch that produced 56 victories in seven years.

Also, a fifth championship proved elusive, but Gordon continued to rank among NASCAR’s elite. He won his third Daytona 500 in 2005, and in 2007 he accumulated a modern-record 30 Top-10 finishes en route to a second-place finish in the standings. Stymied by back problems in 2008, the veteran driver proved more than capable of keeping up with the sport’s young guns in 2014, notching a record fifth Brickyard 400 trophy among his four victories.

Despite his recent success, Gordon also announced in January 2015 that the upcoming season would be his last as a full-time NASCAR driver. At the time, his 92 career victories were third-most all-time, and his four championships ranked fourth.

Brooke Sealey is a model, born in Winston-Salem, North Carolina USA, in the early 1970s -information about her actual birth date has been omitted from the media.

Jeff has an estimated net worth of around $200 million. Hence, there is no information about his salary.

Jeff often used to be a topic of rumors relating his first divorce and several previous relationships.

Jeff Gordon was married to Ingrid Vandebosch on November 7, 2006, and the couple has already welcomed two children,  Ella Sofia in 2007, and Leo Benjamin in 2010.

He has a height of 5 feet 7 inches and weighs is 68Kg. He has brown hair and blue eyes.