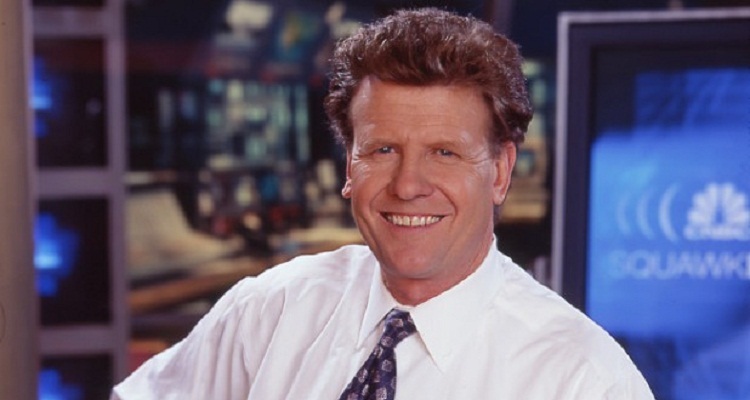 Who is Joe Kernen?

Joe Kernen is a news anchor who works for CNBC. He is the co-host of Squawk Box. He is nicknamed The Kahuna.

Joe Kernen was a stockbroker for almost a decade before he joined FNN (Financial News Network). When FNN merged with CNBC in the year 1991, Joe came over to CNBC.
Joe has authored a book named Your Teacher Said What?!: Defending Our Kids from the Liberal Assault on Capitalism which he released in the year 2011. His daughter Blake who at that time was a fifth-grader also helped him in it.

Joe is known for his firm financial knowledge and during the 2012 fiscal Cliff crisis, he had pressurized Congress to cut down on its, spending.

His net worth stands at $ 14 million.

Joe Kernen and His Controversies

Joe Kernen in November 2014 was interviewing IDA Ireland chief executive Martin Shanahan on-air when he asked him some rather silly questions. The news anchor asked whether Ireland and Scotland wrote not on the same island. He also asked him why Ireland is not using pound sterling currency.
The viewers were taken aback by Joe’s ignorance of geography and the Irish Times joked that Joe thought that Ireland was part of the UK.
Joe denies that climate change is due to human activities and had said in 2012:

“It’s almost like witchcraft. In the middle ages it was witchcraft. You would have attributed adverse weather events to witchcraft.”

“The climate is so difficult to figure out,”

Joe was born as Joseph Richard Kernen on 6 January 1956 in Cincinnati, Ohio, the USA. His age is now 63 years. He was raised in the Western Hills area of Cincinnati. There are no details available about his parents, siblings, or other family members. Some websites state that his father was a doctor while his mother was a nurse. His father’s name has been mentioned as Joe Blake Kernen.

He holds an American nationality and his ethnicity has not been revealed but is probably Caucasian.

As regards his education, it is known that Joe studied at St. Xavier High School from where he graduated in 1974. Joe then joined the University of Colorado and completed his Bachelor’s degree. He then went on to do his Master’s in molecular biology from the Massachusetts Institute of Technology. He had done extensive research on cancer during this time.

Joe is a married man. His wife is Penelope Scott whom he met on CNBC in 1996. The couple started dating and in 1998 they married on a golf course. Penelope is a former commodities trader from Short Hills, New Jersey. The couple has a daughter named Blake Kernen.

Joe Kernen and his Body measurements and Social media profile

He has a good height of 5 feet and 11 inches. His other body measurements are not known. His hair and eyes are brown.

Also, read the 8 richest news anchors in the world!