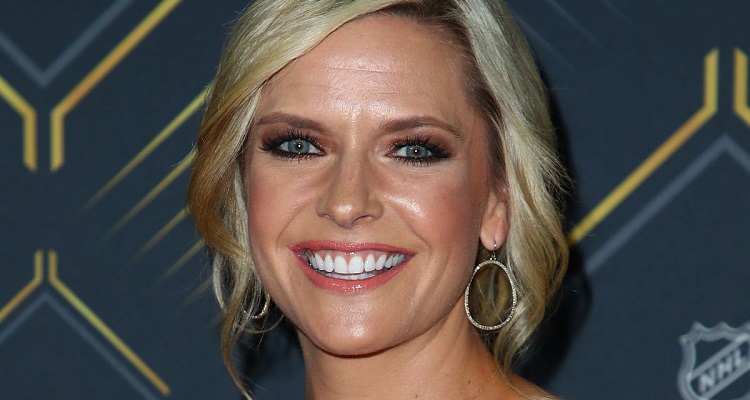 Who is Kathryn Tappen?

Kathryn Tappen is an American sportscaster and she works for NBC’s coverage for NHL, Notre Dame Football, Football Night in America, and both Summer and Winter Olympic Games.

She was born on April 9, 1981, in Morristown, New Jersy, USA to mother Sheila M. Tappen and father Richard G. Tappen. She has a sibling, sister Amanda Tappen.

She attended  Villa Walsh Academy and received academic and athletic scholarships to attend Rutgers University. She graduated from the university in 2003 with a major in journalism.

Growing up Tappen loved sports. She played youth baseball and basketball on boys’ teams as there were no girl teams where she was raised.

In high school, she played golf, tennis, and in her senior year focused on the track. In college, she was a member of the cross-country and track teams. Kathryn Tappen also had earned the title of Academic All-American four times and Big East All-Star as a Scarlet Knight.

After completing college education Kathryn Tappen joined WJAR in Providence, R.I. There she served as both a weekend anchor and weekday sports reporter. Then she landed the opportunity to work for the New England Sports Network (NESN).

In 2011 Tappen joined NHL Network as the host of NHL Tonight in 2011. In 2014, she moved to NBC. With the NBC she has games on Notre Dame Football, Football Night in America, NHL, and both Summer and Winter Olympic Games, among others.

She was nominated for two New England Emmy Awards for sports reporting.

She has an estimated net worth of around $1 million and her salary is around $76k per annum.

Kathryn is currently single. Previously, she was married to her longtime boyfriend Jay Leach on July 18, 2009. Her husband is a former ice hockey player. However, the couple could not hold the relationship and end with divorce in 2014.