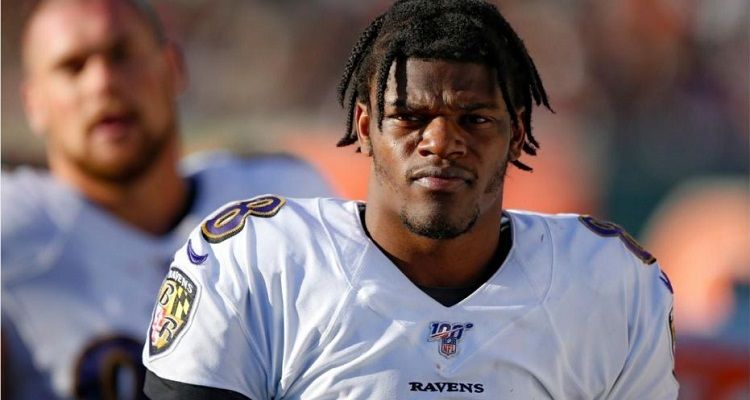 Lamar Jackson is an American football quarterback who plays for the Baltimore Ravens of the National Football League (NFL). Jackson played college football at Louisville where he won the Maxwell Award, Heisman Trophy, Walter Camp Award, and more. In 2019, he set the record for the most rushing yards in an NFL season by a quarterback and the franchise record for the most passing touchdowns in a season.

Lamar Jackson was born as Lamar Demeatrice Jackson Jr. on 7th January 1997 in Pompano Beach, Florida. As of 2019, his age is 22. He was born to parents Lamar Jackson Sr.(father) and Felicia Jones(mother).

For education, he went to Boynton Beach High School in Boynton Beach, Florida and after that, he attended the University of Louisville in Louisville, Kentucky.

In 2015, as a freshman, he played 12 games and made eight starts at Louisville.

During his sophomore year, he set a school-record for total touchdowns with eight against Charlotte 49ers. He won several awards in his college career and is one of the best players ever to play for his college.

On January 5, 2018, Lamar announced that he would enter the 2018 NFL Draft. He was drafted by the Baltimore Ravens in the first round with the 32nd overall pick in the draft.

He made his NFL debut relieving starting quarterback Joe Flacco in the second half in a 47-3 victory against the Buffalo Bills.

On 18th November 2018, he got his first NFL start in a game against the Cincinnati Bengals. He went 13 for 19 for 150 yards and an interception and rushed for an astonishing 117 yards, which was a Ravens record for rushing yards by a quarterback in a single game which eventually ended in a 24–21 victory for the Ravens. Till the end of the season, Jackson established himself as an important part of the team. The Ravens’ coaching staff decided to abandon the offensive strategy designed for Joe Flacco and create a new philosophy centering on the specific skills of Jackson.

In the opening game of the 2019 season against the Miami Dolphins, Lamar went 17 of 20 for career-high 324 yards and 5 touchdowns which made him the youngest quarterback to achieve a perfect passer rating in the 59–10 victory.

Against Cincinnati Bengals, he finished with 236 passing yards, 152 rushing yards. He has also played 8 games where his 637 rushing yards led Michael Vick’s 2006 record of 573 for the most by a quarterback.

Similarly, he was the AFC Offensive Player of the Month for November.

Jackson has an estimated net worth of around $4 million. He has an annual salary of around $2.1 million.

Jackson has a height of around 6 feet 2 inches and weighs around 96 kg. In addition, he has dark hair and brown eyes.