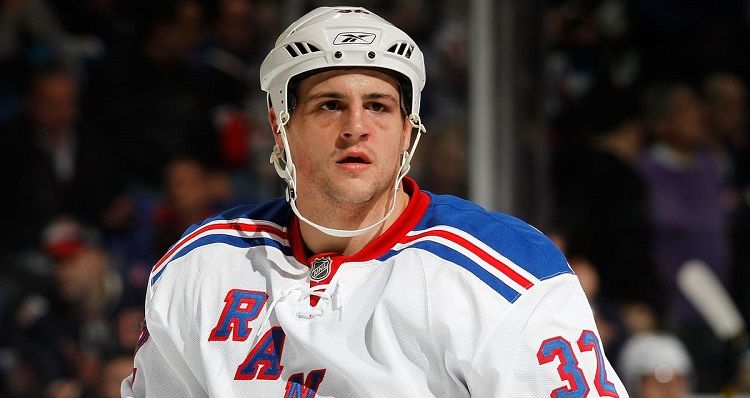 Micheal Haley is a professional Canadian ice hockey player. He currently plays as a forward for the ‘New York Rangers’ of the National Hockey League(NHL). Micheal scored a career-high 12 points which included two goals and 10 assists in 58 games during his first full season with the Sharks (2016-17).

Michael Haley was born on March 30, 1986, in Guelph, Ontario, Canada. As of 2019, his age is 33. The Rangers forward has Canadian ancestry. There is no information about his parents, siblings, and family.

Haley started his professional career by signing a two-way contract with the New York Islanders on May 19, 2008. He made his NHL debut with the Islanders on April 10, 2010, against the New Jersey Devils.

On July 1, 2012, Michale signed a two-year contract with the New York Rangers as a free agent. He played for the club for two seasons.

On July 10, 2014, Michael signed a one-year contract with the San Jose Sharks.

In his third season with the Sharks, he played his first full season as an NHL player contributing 2 goals, 10 assists and 12 points in 58 contests, while also leading the team’s penalty minutes with 128.

On July 1, 2017, the Canadian left the club as a free agent and signed a two-year contract with the Florida Panthers.

During the last year of his contract with the Panthers in the 2018-19 season, Micheal played 24 games before being placed on waivers on February 19, 2019. The following day, he got claimed and returned for a second stint with the San Jose Sharks on 20th February 2019.

Micheal Haley has an estimated net worth of around $2 million. Recently, he has signed a one year contract with New York Rangers which is worth $700,000 for the 2019-20 season.

Micheal has brown eyes with brown hair. He has a height of 5 feet and 10 inches and a weight of around 93 Kg.

You may also like to read Who is Andrew Taggert dating? Haley or Halsey? Let us delineate his relationship history!