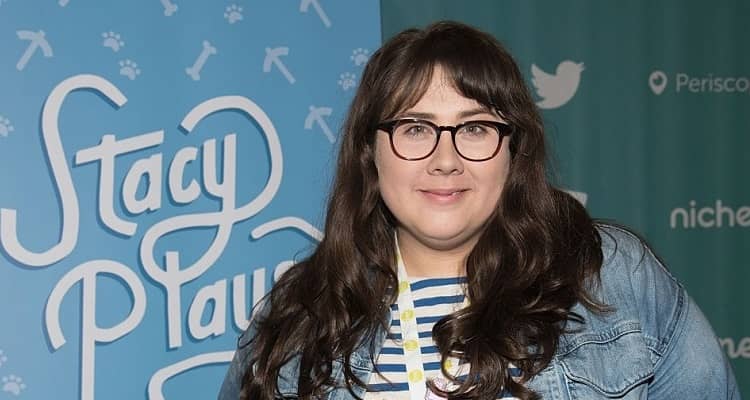 Stacy Hinojosa is a famous American YouTuber, gamer, and vlogger. She is probably best known for her YouTube channel called “StacyPlays” – also known as “StacySays” – on which she posts daily gaming videos, most frequently playing Minecraft.

Also, Stacy Hinojosa has a second channel, “StacyVlogs” on which she posts video updates of her life, and of her pets – three dogs and a cat. In fact, she has over 2.06 million subscribers on her YouTube channel.

What is Stacy Hinojosa famous for?

Stacy Hinojosa was born on August 23, 1983, in Salt Lake City, Utah, the United States. Currently, her age is 36 years old. Her zodiac sign is Leo. Unfortunately, there is no information regarding her family and siblings. She holds an American nationality and Caucasian ethnicity.

Talking about her education history, she matriculated from a local high school in 2002 and graduated with a degree in Journalism and a minor in Political Philosophy from Brigham Young University in 2006.

All about Stacy’s Career

Talking about her career, she worked a handful of jobs and lived with various people, some of whom are famous YouTubers such as Joey Graceffa, who eventually became one of her best friends, Shane Dawson, Tyler Oakley, etc. before managing to make a living on her own.

Additionally, she established her YouTube channel, Stacy first moved to Los Angeles where she worked as a golf course attendant, a waitress, and an interviewer, during which for online platforms such as Cambio.com, Teen.com, and JYSK.com, she had the opportunity to interact with celebrities such as Kristen Stewart, Taylor Swift, Will Smith, Justin Bieber, Emma Watson, and Nick Jonas. While working at Teen.com she also met Joey Graceffa with whom she became best friends.

Apart from that, she was a gamer as well, they decided to play games together and that’s how Stacy came to create her own YouTube channel. Whereas, in the beginning, she never planned to post any videos of her playing anything – she wanted to use her channel to comment on her friend’s gaming skills, and it was only after some time that she decided to upload videos of herself playing Minecraft. Also, she likes to call herself an “Accidental YouTuber” because she never hoped in her wildest dreams that she would gain so much popularity.

Besides that, the creation of her YouTube channel, Stacy has had several opportunities to collaborate with established and successful companies from the entertainment industry. For example, she became famous for collaborating with ‘Alloy Digital’ on creating innovative games, and then she moved on to work with ‘Maker Studios’, as they offered better salaries and conditions.  In addition, she has also several series that she posts regularly on her channel.

The most popular series on her channel is “Dogcraft”. In fact, it is a single-player survival “Minecraft” series and is the longest-running series on her channel which she uploads every Wednesday and Saturday. Eventually, the first episode was launched on March 8, 2014, and has attracted over a million views, so both the longest-running series and the most viewed.

Whereas, the premise of the game is that Stacy builds dog-themed constructions, and rescues as many dogs as she can. In each episode, she breeds a dalmatian and names it after one of her fans, working towards a goal to have 101 dalmatians one day.

Apart from that “Dogcraft”, Stacey has created several more such as “Cake Quest”, once again a survival series with a character called Sqaishey – Stacy and she accidentally landed on a space cake where sheep are used instead of sprinklers, so Stacy and Sqaishey go on an adventure to save all the sheep. However, “The Candy Isle” is also a survival series in which Stacy collaborates with AmyLee33, in a game where they are mermaids, and a lot of marine life like crabs, whales, and turtles are shown.

Likewise, “Bookcraft” is another “Minecraft”-type series, first launched on October 7, 2014, in which Stacy starts in a normal Minecraft world and then goes on to build scenes from her favorite books, the first being “The 21 Balloons”. After spending a bunch of time trying to build many scenes from the book, she decided to include a team called Walschaerts Build Team; there are approximately five to six builds for each book.

Moreover, the next book was “Charlotte’s Web”, and then came “The Hatchet”, “101 Dalmatians”, “Misty of Chincoteague”, etc. In fact, it is one of the most difficult series for Stacy to film, considering all the preparatory work that goes into it, for example, “The Hatchet” took 11 hours until everything was put together. The episodes are regularly uploaded on Tuesdays and Fridays, but it is currently on hiatus.

Stacy Hinojosa is currently single. Additionally, she might have dated someone but, she has not talked about it. Eventually, she might be waiting for the right time and the right person to be in a relationship with. Currently, she is focusing on her career and developing her skills.

She has a height of 5 feet 5 inches and weighs is 80Kg. She has dark brown hair and brown eyes.